Hit enter to search or ESC to close

To show you the ways I’ve been able to assist people along the ever-changing journey through their life I’ve included these case studies.

Names have been changed to protect the identity of the client.

Journeying Through and
Emerging from Grief

In her mid-forties, the devastating loss of her husband left Jane immersed in grief.  Suffering fatigue and struggling to concentrate she was finding her full-time employment very challenging.  Jane found herself at a crossroad and in a poor state of mind to decide whether she should stay put or move away to be near the comfort her family could provide.

Jane’s husband Eric was able to connect with her during the first session which helped to answer questions around his death that Jane had been burdened with.  An energy healing helped to ease Jane’s emotional load by removing dense energy.  Talking through some of Jane’s difficulties helped her deal with some issues she was having and guide her towards resolving them.

Over several sessions Jane took part in talk therapy, emotional freedom technique (tapping), healings, and crystal sessions, and she received channelled messages.  She found the energy to start taking care of herself again, including reducing her employment hours for a short time while she worked through her grief and readjusted to her new life without her husband.  Jane developed her ability to feel her husband around her and recognise the signs that he was near.  Being able to detect her husband’s spirit/essence gave her a sense of peace and connection.

Anxiety, lack of motivation and low mood were affecting Amanda’s work life.   Though young—in her twenties—I became aware during our first session that Amanda had a hormone imbalance.  Using the skills of a natural therapist her hormones were rebalanced and to assist her hormone health she stopped taking the contraceptive pill which was known to cause depression as a side-effect.  Because Amanda wished to avoid taking anti-depressants she used vitamins to support her mental wellbeing.

With the help of counselling, tapping, healing and messages over several sessions Amanda was able to reframe her thoughts about herself into positive and empowering words.  This enabled her to make the changes she needed to improve her life and become the best version of herself.

Amanda moved forward with a new sense of strength and knowing, a great resource for her in dealing with work challenges.

”Life isn't about waiting for the storm to pass... It's about learning to dance in the rain.

Alice had suffered a long battle with depression and bipolar II disorder.  She was referred to my Intuitive Therapy by another therapist who had been helping her.  Having received psychological and counselling support Alice had been directed towards the idea that spiritual healing along with medical treatment could be useful.

During Alice’s sessions we used EFT (tapping), affirmations, grounding, visualisations, aura cleansing, counselling and messages from Spirit to help her make her way through the problems she had.

Alice found a new lease on life having overcome her major depressive episodes, improved her self-confidence and self-belief, addressed poor patterns of behaviour that were not good for her health and improved her intuition and spiritual communication.

Alice started her own business by finding the answers to problems she needed through Spirit and my guidance.

”And l do now feel lifted, a little lighter. I’m today re- ignited with inspiration to paint and trust, I’m practising gently, many moments a day, and its rather nice, Foreign, at times but I’m sure it’s well time. 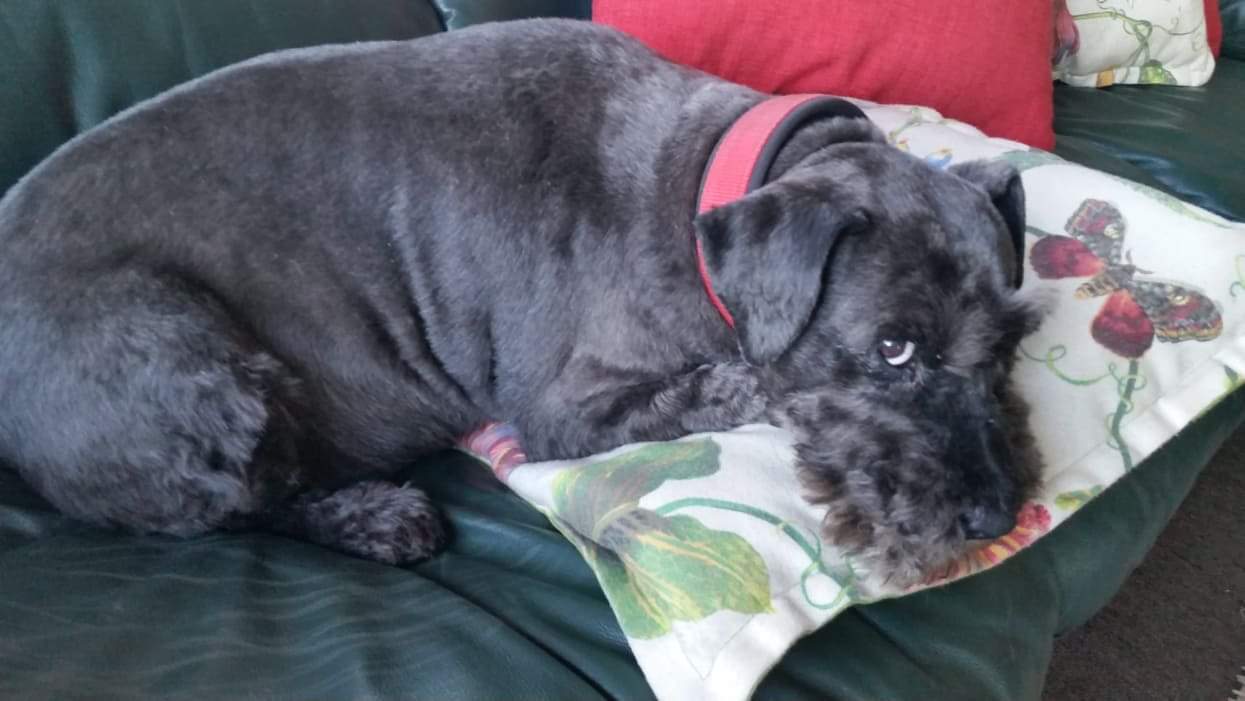 The Dog Days Are Over

Pet: Schnauzer, Clyde, 6 years old
Problem: Yelped/cried at times when being picked up.

I ran my hands above Clyde’s back and in his aura and detected a problem in his spinal column. I worked over the area and sent healing energy to various points along his meridian.  Work to soothe the emotional trauma he had felt when he was separated not only from his human family—who went overseas—but also his ‘wife’ and baby puppies six months earlier helped Clyde.

”Clyde no longer cries or winces when being picked up. He is happy and settled with our family.

Pet: Cat, Ozzy, 4 years old
Problem: Ozzy had recently moved home with her owners, into a flatting situation with another couple.  She was urinating inside and acting nervously, staying mainly in the bedroom away from everyone.

Ozzy’s healing was very much on the emotional level.  I was told by Spirit that in a previous flatting situation she had been teased and tormented by one of the other male flatmates while her owner was out.  I also became aware she had been kicked by this person as I cleared her lower spine.
With the shift she had become on hyper alert in case a similar thing happened again to her.  I cleansed her system and channelled energy, also reassuring her that it was safe for her to relax in this new environment.

”Ozzy is so settled now, and she waits by the door to be let outside to go to the toilet. She is coming into the shared lounge more and she even let our new male flatmate stroke her. A huge change! 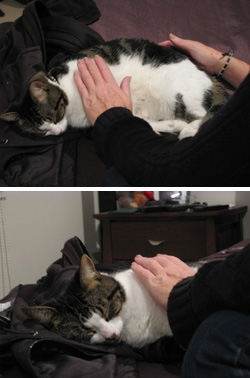 Contact me to secure an appointment or discuss treatment and/or healing options.

Share on FacebookShare on TwitterShare on Linked InShare by Email